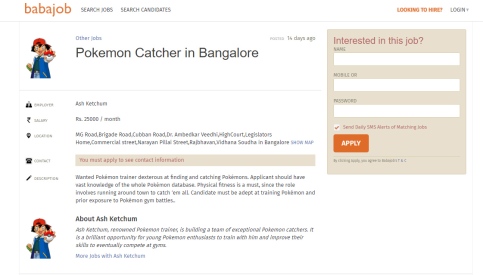 The Bengaluru-based job portal has created a new category for Pokémon Catcher. It allows people to hire others to play #PokémonGo, the vastly popular augmented reality-based game, in their stead.

The company says that it expects this to become a trend soon. The job has currently been posted by Ash Ketchum. Pokémon fans will know that this is the lead character in the original anime series. According to Babajob, the company’s co-founder and COO, Vir Kashyap, is going to hire someone to play in his place.

In an email interaction with Digit, Kashyap explained that he and CEO, Sean Blagsvedt, started a friendly competition amongst themselves in the game. Kashyap however injured himself midway, rendering him unable to play. He plans to hire someone to play in his place, and the person will be paid Rs. 1,999 for reaching a particular level in the game.

The job posting states that the remuneration can go up to Rs, 25,000 per month. A sum that is equivalent to starting salaries for freshers in many specialised fields.

“One should be alert and swift. Also, the user should have enough knowledge about the Pokémon world to become a successful Pokémon Catcher,” said Kashyap, on being asked what the criteria for employment will be.

The opening is currently in Bengaluru, but the company said it has received lots of applications from across the country. The one selected will currently be going around Bengaluru, collecting Pokémon, and visiting other startup offices, which may appear as Pokéstops in the game.

It was only a matter of time before #PokemonGo opened up opportunities for others to earn money off of it. Interestingly, the game isn’t even officially available in India yet, although, the country is generating a hefty load off the traffic on Niantic’s servers. The website shows that many applicants have already applied for the job, and Babajob is currently reviewing the applications to hire a Pokémon Catcher for Kashyap.

I am a Freelance Designer.  Click Here to check my work 🙂