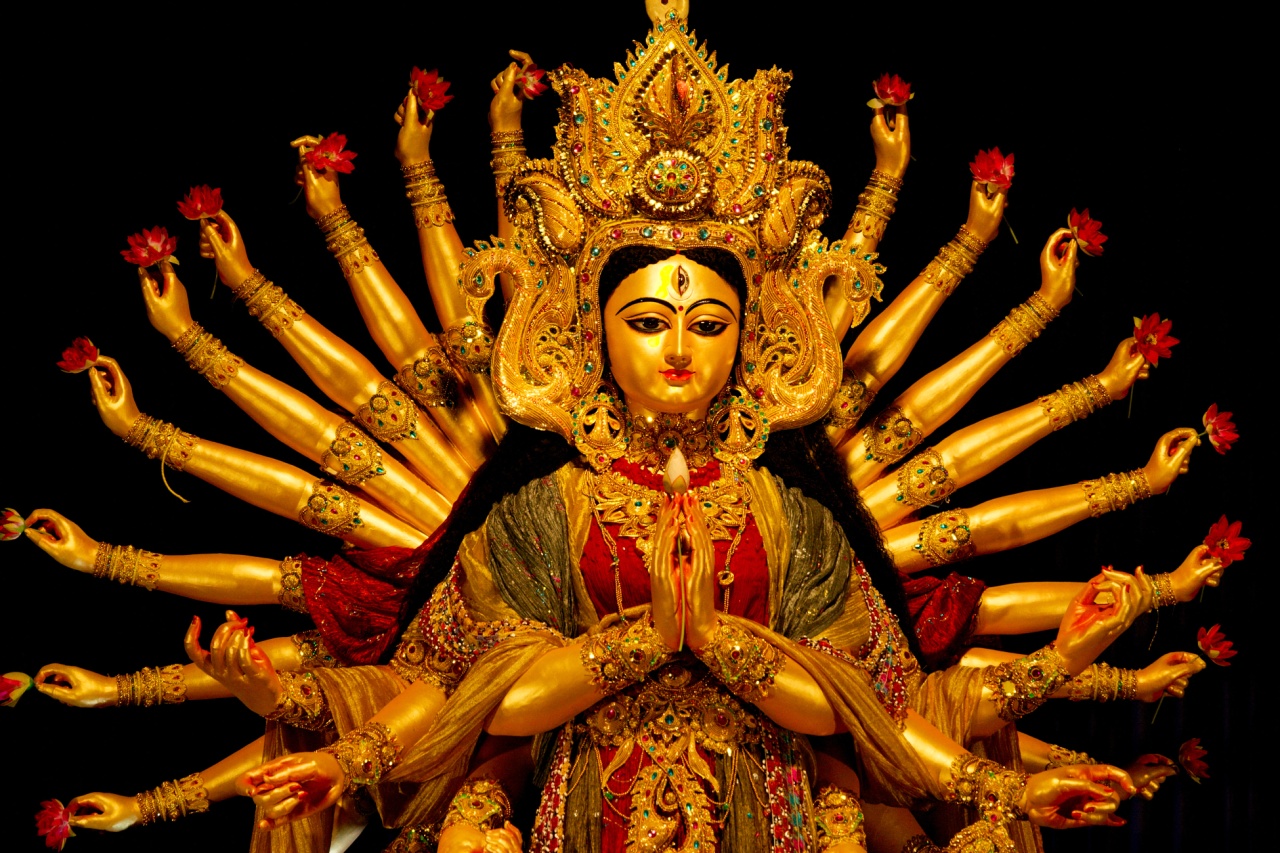 One of the most sacred festivals of India, Navratri is here! And as we all know, this festival is spread over 9 nights and 10 days in worship of Goddess Durga or Shakti which represents the energy of the universe, in her 9 beautiful forms with great reverence. In Hinduism, Mother Goddess is honored in all her manifestations and the celebration culminates on the 10th day with Dussehra, which symbolizes the victory of good over evil.

As the ten-armed Goddess, Mata Durga presents a radiantly beautiful form that is bewitching to behold. The 9-day period from the new moon day to the 9th day of Lunar month of Ashwin is considered the most auspicious time of the Hindu calendar and is hence the most celebrated occasion of the year.

The 9 different forms of Devi are worshiped over the 9 days. These are the most popular forms under which she is worshiped.

She is a daughter of Himalaya and the first among 9 avatars of Goddess Durgas. In her previous birth, she was the daughter of Daksha. Her name was Sati – Bhavani. i.e. the wife of Lord Shiva. Once Daksha had organized a big Yagna and did not invite Shiva. But Sati being obstinate, went for the Yagna. There upon Daksha insulted Shiva.

Sati could not tolerate the insult of her husband and burnt herself in the fire of Yagna. In her next birth she became the daughter of Himalaya in the name of Parvati – Hemvati and got married to Lord Shiva. As per the Upanishads, she had destroyed the ego of many Devtas like Lord Indra. Being ashamed, they bowed and realized that in fact, she is Shakti and everyone including Brahma, Vishnu and Mahesh are capable of who they are by only after receiving Shakti (Energy) from the Goddess.

The second avatar of Goddess Durga is Brahmacharini. Brahma is that who observes penance (tapa) and good conduct. Here “Brahma” means “Tapa”. The idol of this Goddess is a very gorgeous one with a rosary (maala) in her right hand and a Kamandal in her left.

In her previous birth she was Parvati Hemavati, the daughter of Himalay. As the story goes, Brahmacharini was busy playing games with her friends when Naradaji came to her and by reading her Palm-lines he predicted that she would get married to a naked and terrible ‘Bhole baba’ who was her husband in her previous birth as Sati, the daughter of Daksha. He also told her that she had to perform penance for him now. There upon Parvati told her mother Menaka that she would marry only Shambhu or she would remain unmarried for life. Saying this she went to observe penance. And that’s how she became famously known as Tapacharini or Brahmacharini. Thereon, her name Uma became familiar too.

The name of the third Shakti is Chandraghanta. Her name means “one who has a half-moon shaped like a bell. She has ten hands holding a trident, mace, arrow, bow, sword, lotus, goad, bell and waterpot and one of her hands remain in a blessing posture. She rides a tiger or a lion as her vehicle, which represents bravery and courage. She wears a half moon on her forehead and has a third eye in the middle of her forehead. Her complexion is golden.

After Lord Shiva gives Parvati his word that he wouldn’t marry any woman, her sufferings overwhelm him so much that he gives up and followed by a tearful reunion he agrees to get married to her. Soon, the joyous moment of Parvati’s life starts when Shiva brings a procession of gods, mortals, ghosts, ghouls, goblins, sages, ascetics, Aghoris and Shivaganas to the gates of King Himavan’s palace to take away his bride Parvati. Shiva arrives at King Himavan’s palace in a terrorizing form and seeing this, Parvati’s mother faints in terror. Parvati appears to Shiva and sees his fearsome form. To save her parents and other family members, she transforms herself into Goddess Chandraghanta.

Chandraghanta persuades Shiva to re-appear in a charming avatar and thus he appears as a prince decorated with countless jewels. Parvati revives her mother, father and friends and they both get married to one another.

The fourth form of Goddess Durga is Kushmanda. Ku means “little,” Ushma means “warmth” or “energy”, and Anda means “cosmic egg.” She is considered to have created this universe with her divine smile.

When the universe was non-existent and darkness prevailed everywhere, Maa Kushmanda produced the Cosmic egg with her smile, bringing light to the universe. Kushmanda has the power and strength to live in the core of the Sun. Her luminosity gives the Sun its brightness. She is said to give direction to the Sun God, Surya.

Kushmanda is Goddess Shakti herself, the first being of the entire universe and she is believed to be the only one who created this universe by transforming half of her being as Shiva. They thus created the universe and other Gods and Goddesses too. Adi Shakti took herself into three forms. One of the three splits was her own form Kali and hence we find Adi Shakti as well as Kali as the wives of Shiva.

The fifth form of Goddess Durga is “Skanda Mata”. Skanda is another name for Kartikeya and Mata denotes mother. Skandamata rides on a lion and possesses four arms, out of which two often hold the lotus flowers. One of her hands is always in the boon-conferring gesture and with the other she holds her son Skanda in her lap. Her complexion is white and she is also seen seated on the lotus, which is why she is also called the Goddess with a lotus-seat.

As per the belief, Lord Shiva and Goddess Parvati’s energy combines into their own forms of nature while in deep meditation. On knowing this, Lord Indra assigns Lord Agni (Fire) to kidnap the ball of energy and keep it for safety from Demon Tarakasur. After meditation, Parvati realizes what happened and chases after Lord Agni who vanishes with the divine energy to Goddess Ganga. Parvati comes out of her cave and questions the Gods on why Lord Agni stole the divine energy. Parvati gets angry and attains the form of Goddess Durga, when they tell her the reason. She curses the Gods that their wives will never be able to enjoy the happiness with their children and with that, curses Lord Agni that he will be an all-burner, unable to differentiate the differences between right and wrong, his food will have impurities, that he will always be surrounded by black smoke and anyone who touches him in one of the three worlds, will get reduced to ash. Meanwhile, Shiva comes out of the cave and calms her down. Later, Shiva’s son Kartikeya (Murugan or Skand) is born from the six Krittikas (Mothers) and not Parvati. But still, the Goddess accepts him as her own child, thus setting an example of a great mother before the world. In her Durga avatar, she takes Kartikeya from Kritika Lok (Krittika World) to Kailash riding this Lion. Upon growing up, Kartikeya learns about the boon of special powers and weapons given by Lord Bhrahma to kill Demon Tarakasur. Before going to the battlefield, Parvati transforms herself as Goddess Durga to bless Kartikeya. With her blessings, he manages to kill Tarakasur and his army! The Gods thus make him their commander-in-chief.

The sixth form of Goddess Durga is Katyayani. She is called Katyayani as she was born to Sage Katya of the Katya clan. This is the daughter form of Durga. A loving daughter, she is the epitome of love but won’t hesitate to rise up in anger to defend righteousness and Dharma. It is believed that Maa Katyayani persistently battled against the evil and deceitful entities.

Sage Katyayan performed severe penance to please Maa Bhagvati and wished for Maa Durga to be born as his daughter. The Goddess acceded to his request. Meanwhile, an army of the powerful demon Mahishasura, who could only be killed by a warrior Goddess, had reached heaven to overthrow the Gods from their abode! The trinity of Gods – Brahma, Vishnu and Shiva, were infuriated and they create Goddess Durga, who was a culmination of the powers of all the deities. Sage Katyayana had the first privilege to worship her and so she was also named Katyayani.

The seventh form of Goddess Durga is Kalratri. She is black like the night. Hairs unlocked, her necklaces shine as bright as the lightening! She has three bright eyes that are round like the universe and thousands of flames of fire come out of her nose while she breathes. Kalaratri is the one of the fiercest forms of Durga and her appearance itself evokes fear. This form of Goddess is believed to be the destroyer of all demon entities.

She rides on Shava (dead body). She holds a sharp sword in her right hand while her lower hand is in blessing gesture. The burning torch (mashal) is in her left hand and her lower left hand is in a fearless gesture by which she makes her devotees fearless. She is known as “Shubhamkari” in her auspicious state.

There were two demons named Shumbha and Nishumbha, who invaded devaloka and defeated the demigods. Indra, the ruler of the demigods, along with the demigods went to The Himalayas to seek help in getting back their abode. They prayed to Goddess Parvati. She heard their prayer, while she was bathing and she therefore created another goddess Chandi or Ambika to help them out by killing the demons. In the battlefield when Chanda-Munda who was sent by Shumbha and Nishumbha, came to battle Chandi, she created a dark Goddess Kali or Kaalratri. Kali killed them, thus acquiring the name Chamunda. A demon named Raktveej had a special boon. If his drop of blood fell on the ground, another Raktveej would get created. When Kaalratri attacked him, his blood started creating several clones of him. This way it was impossible to defeat him. During the battle, furious Kaalratri attacked him and immediately drank his blood to prevent it from falling down. She thus killed Raktveej and helped goddess Chandi kill Shumbha and Nishumbha! This way, they gave back the demigods a safe place to live.

The eighth form of Goddess Durga is “Maha Gauri.” She is as white as a Conch, Moon and Jasmine. She is usually depicted with four hands, three of which hold a trident, lotus and drum, while the fourth is in a blessing gesture. The lotus is sometimes replaced with a rosary. She rides a white bull, usually shown wearing white clothes. The top left hand is in “Fearless – Mudra” and her lower left hand holds “Trishul.”

She is calm and peaceful and exists in a peaceful form. It is said that while observing penance, the dust and earth made Gauri’s body really dirty. Shiva cleans her with the water of River Ganga and Immediately her body transforms into a bright form like the lightning! Thus she is known as “Maha Gauri” as well.

The ninth form of Goddess Durga is Siddhidatri. There are eight Siddhis which are Anima, Mahima, Garima, Laghima, Prapti, Prakamya, Iishitva & Vashitva and these Siddhi’s are given by Maha Shakti.

It is said in the “Devipuran” that the Supreme God Shiva got all these Siddhi’s by worshiping Maha Shakti. With her gratitude, Lord Shiva’s half self was transformed into a Goddess and therefore his name “Ardhanarishvar” became well known. The Goddess drives on a Lion, has four hands and looks pleased. This form of Durga is worshiped by all Gods, Rishis-Munis, Siddhas, Yogis, Sadhakas and devotees for attaining the best religious asset.